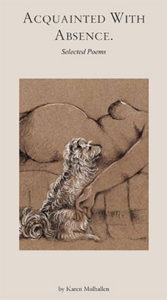 From the introduction by Douglas Glover:

In “Letter V” (from In the Era of Acid Rain, 1993), the poet addresses an interlocutor: “You complain of my limited subject matter. Death, you say, it’s always death. Let’s hope we can keep up the supply of men, to fuel your ruminations.”

To which the poet replies: “But, my dear, you are mistaken. It is not death but union, mating, bridgeworks, which is my subject. Yin and Yang. The severing of bridgeworks, my lament.”

Love and death, then are the subjects, and they are the same, for love implies loss, and death reminds us always of the living thing that was before and the two together are located at the limits of language where each word suggests its opposite and together they create diapasons of wholeness and loss. In the poem “Sheba Oenone” (from Sheba and Solomon, 1984) from which the title of this book is taken, Sheba addresses Solomon after returning to her desert kingdom.

The chronicler warned me
Of the return from your kingdom
Too long you will remain, she said,
After dark is dangerous.

She has remained too long in Israel, the lover’s realm, and, home now, she addresses him as if from the Land of the Dead in a series of paradoxes interspersed with the physical signs of arousal. So that love, loss and desire form a triumvirate of modalities defining the poet’s impossible state.

When it is damp, the water sinks
Eyes flicker
When it is dry, the fountain sprays
Veins pulse
When it is sunning, the prisms crack
Core throbs
When it is darkling, the stars shine
I am waiting.

Acquainted With Absence is about longing for the mysterious one, the fatal flawed lover, it is about travel–the poet goes away and writes back, the lovers call from far away or visit and disappear or hover just beyond reach–it is about the deaths of loved ones, a litany of loss with which we are all, yes, familiar, though for each of us the litany is different. That first book Sheba and Solomon seems now so significant, though it’s early and a kind of trailing harbinger–much later the books come faster–but it’s about a pair of legendary lovers whose courtly affairs mixed with affairs of state seem to belie the passion and eros that inspire the poems. Impossible loves are the only kind, it seems, in Karen Mulhallen’s poems, yet in Sheba’s realm eros has a bite, and an impishly libidinal smile hangs over heart and bier.

These are poems culled from each of the poet’s books, also some are uncollected, and one is unpublished till now. The result is a Frankenstein if we assume that the author’s intent was to create a separate living organic whole with each collection. A very elegant and original Frankenstein, to be sure, a Rudolf Nureyev of a Frankenstein, though no less the child of a radical surgery. I have put the arms and legs from one book with the heart and ears of another. The things I have left out haunt this collection and me. There is a rough narrative arc that is only notionally chronological (the author has had a notable life–Woodstock childhood, Blake scholarship, academic career at Ryerson University (now Toronto Metropolitan), more than thirty years of fostering the country’s writers with Descant Magazine, marriage and aftermath, romances, periods of creative sequestration, fierce, loyal friendships, wanderings, and, always, the writing). But I start with a poem from the author’s first collection and try to dance through marriage, lovers, family deaths and deaths of friends, and travels, vectoring toward that moment when she herself perished, technically, at least, in a diving accident and then came back. (Examining her afterwards in Toronto, doctors discovered her skull to be populated with several mysterious and charmingly named UBOs, Unidentified Bright Objects.)

Ripped from their settings and reordered intuitively (my intuition) the poems now hint at an autobiography that is not Karen Mulhallen’s autobiography but somehow recollects her emotional passage, her obsessions and the idiosyncrasies of an original and remarkable mind. Reading and rereading her, one begins to notice, beyond the narratives of love and death and the concrete references to loved ones and beloved places (ripped from context, the loved ones and beloved places become mysterious and mythic–the lover is a Demon Lover and the earth is Gaia, fecund, damp, sensual), insistent recurrences:  water, islands, plant lore, horses, seahorses, even dogs–lovely to watch the imagery unfold into myth, comedy, eros and personal anguish.

Where to find Acquainted With Absence

Buy Acquainted With Absence via Amazon.ca

Look for Acquainted With Absence at a local bookstore near you.