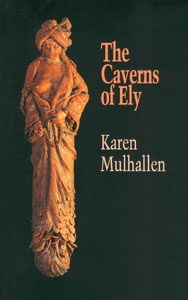 The Caverns of Ely

The Caverns of Ely is a long narrative poem which moves among a number of world: a mythical underwater realm, a village in Cambridgeshire, England, a coral reef in Belize, and a spit in the south shore of Cuba. Myth, history and present reality converse together in a poem which looks at themes of love, courage and archaeology.

This limited edition chapbook ( 32pp.) is published by Pasdeloup Press (1997) with a cover illustration from a terracotta sculpture by the press’s proprietor, author, publisher and visual artist, Virgil Burnett. The chapbook was printed in Erin, Ontario, by The Porcupine’s Quill.

Once, in the umbilical cord of the Americas,
I met a trunkflsh    lodged in a cove
He wooed me with tales of flatlands and horses
and led me to his garden grove.

On the surface, it’s just DNA combining
and recombining
in finite fashion

but enter and you
lose your bearings:
what territory is here?
where am I?
what is that?

Another being’s another
planet, a jungle, a cave,
a sea grotto
of infinite extent,
a quiet journey of the heart
pursued that we might love each other
and the world,
better than we do.

Sirenia, ground zero, a manatee
hugs her pup, suckling
wreathed in seagrass
doomed denizen, like
those others, hidden in caverns measureless,
crossopterygians, impossible name,
night-haunting creature
coelacanth, fringe-finned fish,
Latimeria Chalumnae, father/
mother, ready to walk,
but above or below, all doomed.
Danger of language, echo of heartache
Whom might I tell whom the telling might not destroy?

Today, the first snow since you have gone
The garden vibrant with large, soft flakes
I sit at the window
of the small guest room
looking out, looking at the flakes
Thinking of you.

Against the panorama of gold,
of grain, of green, of sugar beets
of red of lettuce,
against these are the horses.