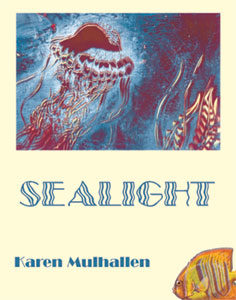 Karen Mulhallen, the renowned editor of Descant Magazine, one of Canadian’s best periodicals, is an accomplished poet. She turns her attention in this newest book to poems which sweep from such large themes as the beginnings of the world, the birth of the oceans, the seas and the birth of the moon to such concerns as Cosmology, the family, diving, winds, death, reading the clouds, the Toronto Islands and the San Andreas Fault.

Into this work she pours her experience with learning and absorbing the world around her. She writes about the Vikings journeying to Newfoundland, about Myan mythology, that batcaves of Aruba, the eel-infested waters of Lake Ontario, Marilyn Bell, the swimmer. The human and the cosmic are read against each other in an expansiveness of time and space. This book is for anyone interested in ocean life. The poems are both lyrical and epic.

Cover Detail: Down Way Too Deep, a diptych painting by David McClyment.

The Horses of the Dawn

Each day on the beach the horses appear.
There are four of them, and a man.

Horses came with the dawn, hyracotherium,
and the dawn horse was small,
only four hands tall from withers to the ground,
four toes on each front foot, and three on each hind, just like a guinea pig.
And like a guinea pig hyracotherium walked on the pads
behind his toes, and not on his little hooves.
Hyracotherium lived in the woods, ate twigs and leaves
and had fourty-four teeth.

It took fourty-four million years for the dawn horse to lose all those toes.
It grew tall, with a long neck
and its teeth became grazing teeth, and the rest is horsestory.

The man would slip the bridles off each horse.
One an Arabian, fifteen hands high, with a delicate muzzle,
a long neck, a full chest, a short back, and long slender legs,
one a splashy black-spotted white appaloosa
one a golden palomino with a glorious white tail
the fourth, a slender, fast-moving chestnut thoroughbred.

Each would approach him from behind,
extend its tapering muzzle
and rub up and down his back.

Then, one at a time, he would lead them to the edge
carefully they stepped into the water from the sandy beach
which sloped quickly down
and the horses wold begin to swim, manes flowing behind
tails floating, and the rider would wrap her hands into the horse’s mane
and begin to float on the back of the sea,
on the back of the swimming horse
as the sun fell into the embrace of the Caribbean sea.