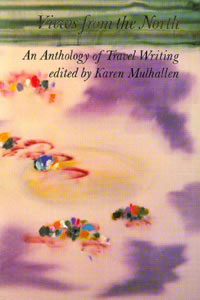 Views from the North

‘We are flying directly into darkness, the dim polestar rides on the starboard wing, Orion and his blue gems freeze in the southwest.’

Views from the North is a book about Canada, about travel and of leave-taking, of loss as much as longing, but a book, moreover about this country — reflected, albeit, off the inside lens of a tourist’s shaded sunglasses.

Strange times, these, for Ibrahim and Veena, for Bjarni and Sverri, but Sverri wants us to see a church, and is that modest Faroe chapel indeed consecrated to the same God of the cathedral at Santiago de Compostella? Is the Spanish still spoken on the Jacobean Road comprehensible to the urchins of the Punta Banda?

Views from the North is a book of questions, more than latitudes. Is zipless sex the same, in Zambia? What is that barge on a canal in Burgundy? Does the same sun that rises on the temple at Khajuraho also burn the mist from the lilypads of Kay Graham’s Algonquin Park?

Views from the North is about romance. It is about holy lands and silk roads, but it is also a book of return, of return not only to the native land but to that other land, the ancestral one, the land of the fathers — to the Japan of Roy Kiyooka and the Poland of Sam Solecki.

Toward Punta Banda the road began to wind up on
bare hills, the air
became clear, and tiny particles of light
made prisms of
the element just beyond our grasp.

The wind came up strong
moving grasses on the sedge as
we wove up and
down and
round toward an end
we could not anticipate.

We chose you Punta Banda
from the map where
you appear a crooked
beckoning finger of-
fering delights encap
sulated in the words La Bufadora.

Sometime a car in motion
does not move the
earth is stable and the sky
with uncontrollable
velocity recedes.