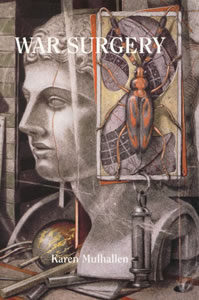 “War Surgery weaves two narratives like the weft and warp of an intricate carpet — the surgery of love and the surgery of war. In these exquisite, iron-willed poems, Mulhallen asks tough questions in ways that left me both devastated and exhilarated.”

– Rosemary Sullivan, from the jacket cover

Marshall Biron, the revolutionary general, loved tulips
spending fortunes on the annuall
and so, at tulip time, you phoned from Paris
two days after my mother’s death, at tulip time, in Ontario.

You pretended, as always,
since it was before eight in the morning
that you had caught be déshabillée
(which was certainly true)
and with someone else
(which was unlikely)
And by your politeness carved out a space
for the fact that you were calling me
from another woman’s apartment,
and that you had called because I had called you
not in Paris, but in New York,
at another man’s apartment.

The discretion of relationships, their eternal complicity.

You asked if you should call a little later.
You are always polite. That private school training.
Those little boys from University of Toronto Schools,
in their bright neckties,
following me home at the end of each school day,
begging me to sleep with them.

Now you never wear a tie,
living so long by your wits
and other people’s affection.
On sufferance, Mrs. Grundy used to say,
ignoring the idea of friendship,
and even solidarity.

But I like your formality, I always have,
and your fear that you might be intruding,
with its concomitant demand
that I never ever intrude on you.
It’s a bargain I can live with,
and so I demur
that you are not intruding, not now, nor ever.
Although I can’t help thinking how,
not long before we met,
my elder brother complained about you —
“pipsqueak” — how wrong he was
“little squirt” — and doubly wrong —
wagging your finger at him,
and I can’t help remembering
how you are always getting
a little beyond yourself,
with the brothers of the women
you screw.
But I do like feeling
like a very tall woman with you.

Now I am on the phone,
you don’t know what to say.
Death for you is commonplace,
and we never ever talked about my mother.
So you begin to tell me about your life
in Paris, this time.
All the old friends, not seen for years,
the French elections
co-opting the interest
around your book launching,
the Matisse show at the Centre Pompidou.
And I think again about my mother.
How she begged me in November
to take her place in New York
at that very show.
And I refused,
and she bravely went,
and returned
within only a day,
to go under the knife to die,
that same Matisse on her mind.

When you tell me you’ve been looking at art,
I don’t know why I laugh.
I really shouldn’t.
I know that’s a gift for me.
Yet there’s something about you in the Hotel Biron
that seems odd, and appropriate.
The Hotel is its own ruin,
in the best eighteenth century tradition.
And you have made ruination your own.

I return to its grand staircase,
the enormous windows
the Palladian fashion,
opened to Camille Claudel,
dominated by Auguste Rodin.
Little Lady of the Manor. Conversation.
Age of Maturity.
Aurora.

The Kiss. The Walking Man.
Eve. The Age Of Bronze.
Balzac. Victor Hugo.

And then, the informal, formal gardens,
The Thinker.
The Burghers of Calais.
The Gates of Hell.
Ugolino, nobleman of Pisa,
accused of treason, locked in a tower,
with sons and grandsons,
to starve to death.
Dante,
The Inferno,
The Divine Comedy.

If you think this is your life, you may be right.

I can’t find a word to bind us all together,
your life, my mother, my life,
the body parts in the ruination of the Hotel Biron.

Words from cold climates,
promising succinctness,
naked Terra del Fuegians
coining the world’s most concise desire:
Mamihlapinatapai
Looking at each other hoping that either
will offer to do something
which both parties desire
but are unwilling to do.