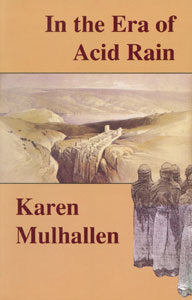 In the Era of Acid Rain

In the Era of Acid Rain is a travel book. Like all travel books it is a work of fiction. Actual places and characters are seen through the eyes of imagination and dream. Fiction and actuality interact. Times, places and contexts shift and reform. The narrator reverses our expectations and ordinary fictional strategies. Real people interact with fictional beings in fictional situations in real places.

Ultimately, In the Era of Acid Rain is a fiction about change, about politics, environment, and the search for union. It is a book about our time, its crises and contradictions.

In the summers of my seventh, eighth, and ninth years, I used to go to eastern Ontario to visit my uncle George, my aunt Mabel and my cousin Sylvia, known as Tinkie. There I felt immensely useful, and very grownup, in a way not yet possible at home. My aunt, who was round and buxom and gay,with bright red hair cut in a short blunt cut, once or twice a week, would call me before dawn to get up to go off to Perth with my uncle in the pickup truck to help him collect the greens.’ I remember the darkness of the country roads, pierced by the truck’s headlights and edged with coming light, and the thrill of sitting up high in the cab of the truck. I also remember the basement of his store where, in the locker of the cold cellar, I would lie on bags of old potatoes, next to crates of lettuce, and to the produce that was on the edge of rot, chattering away in the arms of whatever young boy he had hired to help in the store that summer. There was always the coolness and the sweet smell of fresh moist fruit and vegetables, for the greens were hosed down regularly in the deep counters in which they lay, so they had that look of a garden after the fall of the first soft summer rain.

In early December of last year, I returned home one Sunday evening from a meeting and cleared my answering machine. On it was an abrupt message from my old school friend, a painter named Jaquie, informing me of the death of Laura Minielly, who had been Bertha Schneider, a girl with buck teeth and braces and a long dark blonde pigtail. Bertha rode a blue balloon tire bicycle and lived on the other side of the tracks. We rode our bicycles together all over town, and whispered all our secrets to one another. I was once madly in love with her, in the way of little girls, for I could imagine nothing and no one more beautiful than Bertha Schneider, who was of course not beautiful at all. We were friends from the age of ten until I was twenty-six, when she offended me for the last time, in a combined insult that involved both my mother, her hairdresser and Christian conversion, and I moved back a bit, although we never were really out of touch. She had left school in Grade 10, and become a Bell Telephone Operator, and married above her class to the consternation of her husband’s parents. She taught me how to smoke, which we did regularly above her father’s garage, and all about sex, which I learned from the discussions of farm women — her cousin for example, who had a daughter by a hired hand, when she was scarcely eleven years old and neighbours, who gathered in Bertha’s mother’s warm kitchen, where there was always something to drink and eat, and strange foods like hearts, which I only ever saw there, roasting in an oval dark blue enamelled pan in her oven. I lent Bertha my first watch which I received for my tenth birthday. It too is shaped like a heart, with diamond and ruby chips instead of numerals. To two ten-year-olds, it was the very epitome of glamour.

Bertha was a rather slim girl with large breasts, and the black and red nylon negligees which she bought for her wedding night, and which she proudly showed me, were designed to capitalize on these facts. Her father was an enormous man, whom I always thought was a butcher, because of his last name, but was in fact a factory worker. Weighing in at three hundred pounds, he was a sight on his bulging balloon tire bicycle, with a large black lunch pail in a wicker basket hung on its handlebars. He died when Bertha was just sixteen. I missed his funeral and have never stopped feeling guilty that I did.

There were other large people in my childhood; they seem to have stayed with me more than others. Bertha’s own brother was called Porky, a name which speaks for itself. But there was also the man next door, Mr Teeple, whom we called Mr. TeaKettle, when I was three and four years old, and the sight of his rear end as, strawhatted, he bent over, raking his garden in pin striped trousers, held up by white suspenders, was so enticing that we dared each other to run a finger down the prodigious crack which he displayed. I’ll never forget little Billy Rose, his grandson, who was only three years old, running down the gravel road chased by Mr TeaKettle with his rake raised aloft. Bertha was also the name of my Nana, who was a large Swedish woman, whom I loved immensely. She taught me as a baby to sing and clap hands, and talked me through my childhood arid my adolescence. She it was who taught me all about love.

Just before the end of February in Quito, Ecuador, a man dressed as a woman was stabbed to death. A bag of makeup was found on the road nearby. That same night, in the garden of the Hotel Galapagos, on Santa Cruz Island, a Great Blue Heron, with one wing, stood until dawn in a tidal pool. Two days later, as I was preparing to leave, I returned to my room to finish packing and found the two chambermaids already busily cleaning. When I said I’m not quite ready, one smiled and giggled, the other glared. In her eyes, I saw pure hatred for the gringo. “You’ve had an epiphany,” E2 said later. I think so, yes: them/us, I replied. When I returned by boat in a week, I noticed for the first time the flowering oleander trees, the enormous coral hibiscus bushes, and the poisonous light green manzanilla tree with its bright lemon flowers. I walked from the docks across town to the garden of the Hotel Galapagos to visit my Great Blue Heron. His salt tide pool had dried up, and only two sandpipers remained on it. He was standirrg, as always solo, now by the sea wall of piled black lava stones. He was gazing out to the sea, as do I.

And now I must begin The Tibetan Book of The Dead. [Here beginneth ich the boke of the dede.]