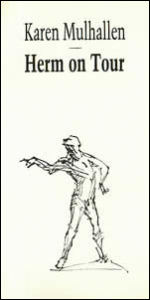 This fanciful narrative poem, written entirely in ottava rima, is set in Edinburgh and Rossyln Glen. In the poem a Saint-Porchaire vase from the Royal Scottish Museum leaves its case in the museum and sets sail in the last untouched glen in Scotland.

A limited edition chapbook published by Pasdeloup Press (Stratford, Ontario, 1998), printed by The Porcupine’s Quill, Erin, Ontario. Illustrated throughout with images after drawings by Virgil Burnett.

leaning saucily in leafy apron
over the bowl like Narcissus yearning
toward the beautiful boy who blew him kisses
from a purple irisfringed ferny pool.
From cream Saint-Porchaire ground he reaches
from garish polychromed Palissy landscapes
of salamanders and serpents, cockles and mussels,
chunky lobsters and frogs frozen inclear tin glazes

a latecomer to Edinburgh
a long journey from the Gothic
crenellations of Walpole’s Strawberry Hill
its objects of virtu, its mushroom and
cream library, and endless basins
of stomachachey fresh strawberries and cream
The herm is ebullient as no steers his boat
to plant a kiss on his own figurehead

his deep golden curly hair wreathed in
triumphal glistening gold braid.
Four bald men with cuphandle ears
strain at the pitcher’s belly
mouths open for a high C, or the wind,
a gilded Greek key frieze like an endless
summer wave holding them firmly
in their stocks.

Other herms appear, a duet of lions
harmonize on the E, a trio of
kings sing a D about the base,
a song of moulds, appliqué
punch, strap, and stamp
of rust lozenges, flowers and
leaves, gilded quatrefoils and
purple calligraphic arabesques,

Oriental tracery of green and blue on cream
suspended on the negative of bulge
transparencies released from earth,
design shaping bowl and not
contrariwise, as puffs of elder flowers
launch their leaves, or the cadmium
yellow bloom its verdant bush.