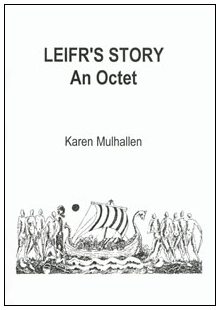 In this narrative poem Leifr Eirikkson sets sail and arrives at the new-found-land. The poem was inspired by a fragment from the Saga of the Greenlanders and takes place both in a fictive past and in present day Norway and Canada.

Leifr’s Story, An Octet (8pp.), a limited edition chapbook, published by Pasdeloup Press in 2002, and illustrated with images after pen and ink drawings by Helen Edmonds.

My Name is Leifr Eiriksson
It was I sent him to the forest to took for the trees
He was an old man
I sent to him and sent to him for the boat,
he was the father of the father of my wife.
Patience, he said, the trees are not yet ready
there is no shearing away of the boughs
the trees must he ready bent just so.

You see, here is the boat we travelled in,
and over there is the boat of Snord’s father
looking a little like an Issey Miyake cape,
wooden feathers spread on a horizontal plane
arrowheaded shadows on stark state floor.

You have seen the posts for the sleds
carved as we waited
one winter, two
we began to lose patience
My men were ready to go
The seashore gave its treasures to us
a twisted vine of the wild grape,
the tight fruit like porphyry still clinging,
a tuft of crested seat fur,
healing fruits of the juniper:
these we knew were got the same as our own
they came from away:
we were ready to go.

As I write I can not say how we will end.
Mayhem in the world
our sailors report heat, then a tornado
in the English land      in the sea to the south,
east a blanket of smoke and haze
On the plateau of Tibet the animals have frozen
We are bound as winds to ocean waters chickens to fish,
and yet what is coming is coming as it always has.

I have been to the western isles and borne witness
The Ways of God are not our ways,
His depths greater than the well of Democritus.
And what I did not tell you was what you divined
How the old one came leading me to the mountain of Helseggen.
Giddily peering down on the raging surf
in the middle distance we saw three islands–

From Lofoden we locked toward Moskoe, a great moaning
mouth of a terrifying cylinder in the smooth circle of the sea
Moskoe-ström, maelstrom
whose centre some hold penetrates the globe.
As he and I lay on the mountain
a copper-coloured cloud rose up from the south,
then the heavens turned black, black as the deepest night
a bright clear blue circle appeared

then the moon herself full with the lustre of a South-sea pearl.
I felt as if I were plunging, dreaming falling
I closed my eyes as the abyss rose
I hung in a vast smooth black tunnel spinning round
in the nacreous light of moonbeams
in the innermost depths of darkness.

From the bottom sprang a magnificent rainbow
a bridge between time and eternity
from the vortex of vessels
and trees and furnishings
just as one finds on the rugged coasts of Lofoden
strewn by the Moskoeström
Three ships arrived,
the rainbow vanished and the moon
and the sea became again like a mirror.