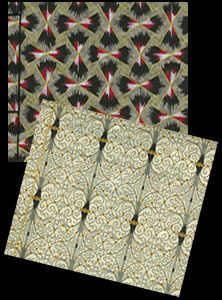 This book is a game, conceived in the Fall of 1994, which took two years to complete. The tankas were mailed back and forth wherever the authors might be residing at the time. The changing landscapes, seasons, and states of mind are reflected in each volley and its return. A game of poetry played by two friends.

A Sentimental Dialogue ( 34pp.) is a Pas de Luce Book from Pasdeloup Press (1996), hand printed in a limited edition of 120 signed and numbered copies with variant Japanese paper covers, and hand-stitching in the Japanese fashion. This is a dialogue poem between Karen Mulhallen and Virgil Burnett in the shape of a Japanese renga, which consists of 100 tankas which alternate between the two authors.

Our gaming’s gossamer couch
Webbed with not quite chaste intrigues.

Better plunge than gape
From the uneventful shore.
Even the walrus

Sports, and the lustful squid, charmed
By your dark mermaid allure.

Allure, perhaps, but
Never a Lorelei. Rocks
Are for surf and sun.

A mermaid’s essence to attract
The ocean’s bounding beings.